None of the electoral alliances or none of the parties emerged as the clear winner from the election. According to the Kosovar constitution, the Kosovar president instructed the top candidate of the strongest party or the strongest electoral alliance, in this case Ramush Haradinaj from the PAN electoral alliance, to form a government. Vetëvendosje! and the LAA had ruled out a coalition with PAN in the run-up to the election. After a political stalemate that lasted for almost two months, which developed into a veritable political crisis, Behgjet Pacolli’s AKR party changed political camps and created an electoral alliance for the PAN, so that Kadri Veseli became President of Parliament on September 7, 2017 and Ramush Haradinaj on September 9, 2017 as Prime Minister could be chosen.

The election results allow for a variety of interpretations. Most obvious here is the development of the LDK, which reached over 45% in the first two parliamentary elections, but after Ibrahim Rugova’s death shrank to around half of the result. In the opposite direction, the PDK developed, which steadily increased the share of votes from 2001 through 2004 to 2007 and 2010 and 2014 could preserve. The 2007 election produced landslide-like results, as a result of which the PDK replaced the LDK as the strongest party. The election results of the AAK are relatively constant, with a slightly increasing tendency. The dynamics of the political system can be seen from the results of the young parties AKR, Vetëvendosje! and clarify NPK. In the 2017 elections, Vetëvendosje went! emerged as the strongest single party. The demand for new political ideas and solutions and / or for new faces seems to be there because of the success of new parties. This can also be seen in the fact that the two major parties, the LDK and PDK, have lost more than 25 percentage points since the 2001 elections.

On October 6, 2019, early elections for parliament took place in Kosovo after 2017, after Prime Minister Haradinaj surprisingly resigned in July had declared. Haradinaj cited the reason for his resignation that he had been summoned as a suspect by The Hague Specialist Court for questioning; He did not want to burden the work of the government with his personal fate with his move, even though he was innocent, explained Haradinaj. Critics questioned this official motivation for the resignation, suspecting a connection with the increasing political pressure from abroad in connection with the stalled negotiations with Serbia following the imposition of tariffs by the Kosovar government in late 2018 on goods from Serbia (and Bosnia-Herzegovina). They pointed out that Haradinaj should initially only be questioned as a witness and had not officially been declared a suspect.

According to HISTORYAAH, the largest parties PDK, LDK and VV contested the election campaign, unlike in previous ballots without official electoral alliances. However, the LDK and VV announced that, if there were corresponding majorities, they were planning to enter into a government alliance after the election and none of the parties would be available for a coalition with the PDK. The top candidate and candidate for the prime ministerial post of the LDK was Vjosa Osmani for the first time; Top candidate of VV Albin Kurti. The PSD entered into an alliance with the AAK in order to avoid failing the 5% hurdle. For the same reason, NISMA and ARK formed an alliance. In contrast to the politics during the term of office of the current government, which was dominated in 2018-19 by the Brussels negotiations on a comprehensive agreement between Serbia and the dispute with President Thaci because of his support for an exchange of territory, the election campaign was mainly about domestic issues. Above all, the two opposition parties addressed the systemic corruption and the weakness of the rule of law, and the alleged waste under Prime Minister Haradinaj and his bloated government apparatus. They promised a historic break with corruption and the old elites and purges in the judiciary and police as part of the fight against corruption.

The election result became a triumph for the two major opposition parties. The two parties VV and LDK clearly relegated the PDK to third place, with the VV with 26.3% of the votes and 29 parliamentary seats just ahead of the LDK with 24.5% and 28 seats and Albin Kurti thus becoming Prime Minister-designate. In particular, the VV was able to significantly increase its share of the vote compared to the previous elections, even more than doubling it compared to 2014. The PDK received 21.2% of the votes (24 seats) and immediately announced the move into the opposition. The AAK of Prime Minister Haradinaj achieved 11.5% of the votes in the alliance with the PSD, but won all seats of the alliance – 13. ARK and NISMA only came over the 5 percent hurdle and after several (partial) recounts and objections to the election commission received with 5, 002% of the vote 6 parliamentary seats. Among the Kosovo Serbs, the SL achieved a share of the vote of over 90% and for the first time won all 10 seats reserved for the Serbian minority (compared to 9 in 2017). The 10 seats for the other minorities were divided into 2 seats each for the major parties of the Turkish minorities and 6 seats for the parties of the other minorities.

The elections, which on the whole went without any major irregularities, were celebrated against this background and the fact of the peaceful change of power by means of a referendum in Kosovo and the others as a victory for democracy. However, this excluded the elections in the 10 Serbian majority communities, for which local observers and EU observers criticized systematic political pressure, intimidation of the population and even buying votes.

Local elections are held in Kosovo every 4 years, most recently in 2017. The municipality / city councilors are elected as well as the mayors, also directly. Overall, town halls and municipalities / town councils are dominated by the parliamentary parties in accordance with their regional roots. Since the foundation of Belgradtreuen SL, it has governed all 10 municipalities with a majority Serb population – the four north and the six south of the Ibar River. The majority of the SL mayors according to the Kosovar system are also mayors of the parallel municipalities of the Serbian state. The VV currently provides the mayors of two of the largest cities in Kosovo, namely in the capital Prishtina (Shpend Ahmeti) and in Prizren (Mytaher Haskuka). Between 2013 and 2017, Mimoza Kursari Lila, the first female mayor in the history of Kosovo, ruled the city of Gjakova (Gjakovë / ovakovica). 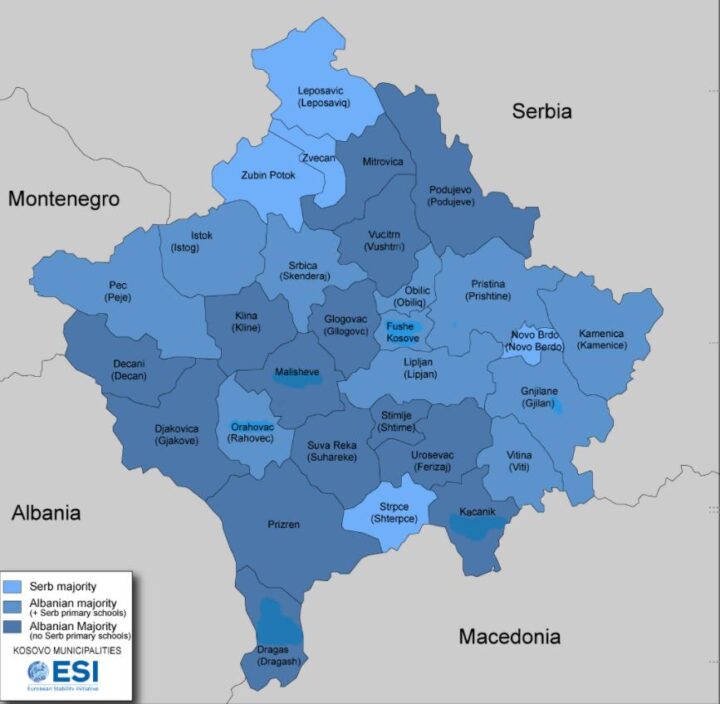